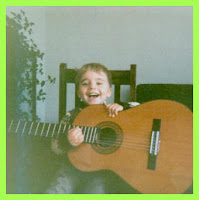 Nine months after his conception during the first days of the ‘Summer of Love’ in 1967, Steve Dell finally greeted the world in January 1968, at the Elizabeth Garrett Anderson Hospital in Hampstead, North London.

Steve’s first experiences of the world took place around Ealing, West London, where he lived with his parents Chris and Carole and his maternal Grandmother and Aunty Shirley in Gunnersbury Avenue. His favourite time of year is early Autumn, which first occurred to him as he tramped through the fallen leaves on his first walks to Gunnersbury Park, where he enjoyed the peddle boats.  Steve’s first memory of a song is ‘Inchworm’, which his mother Carole sang to him, to help him sleep. (It’s the first song sung by Danny Kaye in the film ‘Hans Christian Andersen’).
It seems from this picture of Steve, taken in Ealing in 1970, that he was born to play the guitar. Being that he’s holding the guitar left-handed suggests that he’s pretending to be Jimi Hendrix, who sadly died around the time the photo was taken. 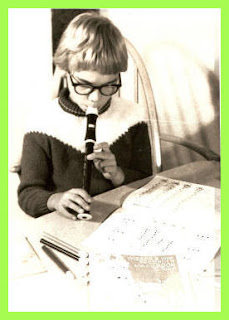 Three days after Jimi Hendrix’s death, Steve’s brother Rob was born. Rob took to learning to play the piano and bass guitar, and as an adult became a primary school teacher, the head of the music department, and eventually a school headmaster in East London.
In 1972 the Dell family moved to Harlow in Essex where Chris was engaged by ITT in their international documentation division. During this time Chris also began working with Candida Tobin, who’d invented a revolutionary method of teaching music using colour.  At that time Candida had published a number of books including Colour Piping volumes 1 & 2 which taught complete beginners how to read music and play the descant recorder using colour to accelerate the learning process.
Looking back, it’s clear that Chris Dell had a fantastic visionary ability.  Not only did he recognise that one day computers would be in almost every home in the world (evidenced by his chosen profession, from the mid-1960s, working for computer companies including Honeywell).  Chris also recognised the genius of Candida Tobin’s Colour Music method, and offered to use his skills as both a designer/graphic artist, and as a semi-professional guitarist. It wouldn’t be long before the first books uniting Chris’ musical abilities and design skills and Candida’s teaching method would be published. 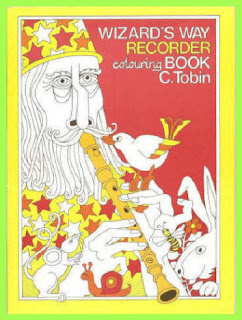 In 1974 at the age of six, Steve was taught by his father Chris how to play the descant recorder, using the Tobin Colour Music method.  Steve’s fast progress meant that he was asked to contribute 2 of his own compositions to Candida’s next descant recorder tutor book, which is still today a world-wide favourite. It is called ‘Wizard’s Way’.
In 1975, Candida, being the owner of an old malthouse with a large studio/attic, decided that hosting professional concerts at her home would be a wonderful contribution to the music world, providing a regular platform for musicians trying to make a name and a career for themselves.  The idea was originally mooted by Chris Dell, as whilst living in Ealing in the early 1970s he’d regularly attended the concerts hosted monthly by the Ealing Guitar Society, which was born in December 1969.
Inspired by the popularity of the Ealing Guitar Society, the Old Malthouse Music Society was born.  It was decided that the majority of the concerts should be offered to classical / flamenco guitarists, as this was the ‘Golden Age of the Guitar’, with guitarists John Williams, Julian Bream and Andres Segovia often making appearances on TV and on radio.  Chris Dell was the secretary of the society from 1975 to 2002, during which time he booked the artists (receiving approximately 12 requests from enthusiastic guitarists every week).  In the time before emails, invitations had to be sent out by snail-mail, so to save postage a schedule of forthcoming recitals was sent out every three months.  Chris also produced the programmes for these concerts, and, having the foresight to realise that it would last, every programme was numbered.  (Anthea Gifford performed at the 100th recital).

Hearing his father playing the guitar mesmerised Steve, who’d quickly tired of the descant recorder and wanted a greater challenge.  Chris (rightly) decided that Steve should wait until his eighth birthday before learning to play the guitar, and so, on 30th January 1976, Steve was presented with his first classical / Spanish guitar, by the Spanish luthiers ‘Mervi’.

At that time, Chris was working on a series of tutor books for guitar, using Candida Tobin’s Colour Music method.  Some of Steve’s earliest memories are of his father working diligently and alone in his study, using a drawing board / easel, a fine Indian ink ‘Berol’ pen, stencils with oval shapes of varying sizes (for the notes), and pages and pages of ‘letraset’, which were used to illustrate time and key signatures, accidentals, musical signs such as dynamics etc.

Within a year or so, Chris had completed the three ‘Guitar Packs’, attractively published with yellow, orange and grey covers, complete with an image of a guitar on the cover that Chris had painstakingly produced using his new ‘daisy wheel’ typewriter.  A testament to Chris’s pride in his finished work is that the final image of the guitar took 3 days.  Today, the same result could probably be realised in an hour by simply ‘copy/pasting’. 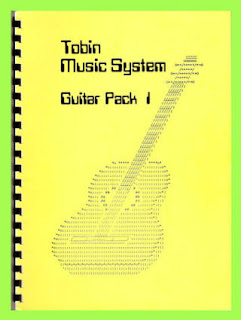 Steve never needed to be hassled to practise his guitar!  Hearing his father playing music by the great JS Bach, Scarlatti, Albeniz, Giuliani, Sor etc, was all the inspiration he needed.  Chris helped his son learn all the tunes in his three guitar tutor books, and upon completing these, he decided that his son should have private lessons with a professional guitarist/teacher.  So, shortly after Steve’s favourite comic (2000AD) hit the newsagents in February 1977, Chris took Steve to visit Terry Spooner.

Steve remembers his father driving him to his first ‘serious’ guitar lesson, handing him his guitar, pointing to the house where Terry lived and pressing £1.50 into his hand. ‘Is this for a term’s lessons, Dad?’ ‘No, that’s for today’s lesson’.
Of course, in 1977, to a nine-year old boy, £1.50 meant 300 blackjacks (liquorice sweets at halfpenny each), or nearly 20 copies of his favourite comic (2000AD was eight pence then), or even 30 bags of crisps.  This was clearly a sign to take the guitar even more seriously.  Steve took a 30 minute lesson with Terry every Saturday morning for four years, and loved every minute of it.

During this time, the Old Malthouse Music Society had become one of the UK’s most prestigious venues for up-and-coming guitarists. Reviewers from ‘Guitar’ magazine, ‘Guitar International’ and ‘Classical Guitar’ regularly visited the OMMS, contributing their appraisals of the concerts in the ‘reviews’ section of the magazines. 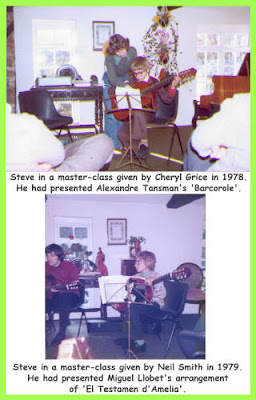 As well as the evening recitals, the OMMS often hosted weekend master-classes, where students of the guitar would have the opportunity to present a piece to a class of other students, being overseen by a chosen professional performer/teacher, who would then give tips and encouragement on how to improve the presentation of the chosen work.  Steve remembers these classes particularly fondly, as the break for lunch would usually mean a visit to a charming local pub for a vege-burger and a shandy.  And of course, Steve not only attended all the society’s recitals with his father from 1975 onwards, but also took part in all the master-classes given by (amongst many others) Graham Wade, Evangelos and Liza, John Duarte, John Mills, Neil Smith, Gilbert Biberian, Cheryl Grice, Chris Kilvington, Robin Pearson and Robin Kaye (flamenco). 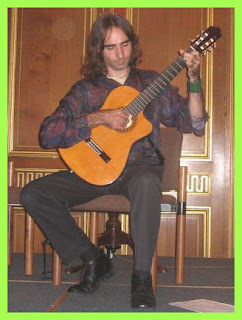 Steve progressed quickly through the graded practical examinations offered by the Associated Board of the Royal Schools of Music.  This was doubtless due to having a fantastic teacher in Terry Spooner, and an inspirational father who’d not only play the guitar almost every day, but also play the many fine LPs by the greatest guitarists of the time.  In this environment, it was impossible for Steve not to be inspired by the magic of the guitar.
During 1983 and 1984, when Steve should have been studying for his GCSE exams more assiduously, he was devoting more and more time to the guitar, and to composition. During these years he wrote his earliest works, ‘Seven for a Secret’, ‘Practise Makes Perfume’, ‘Beyond Dawn’.
During the 1990’s Steve divided his time between the classical/Spanish and electric guitars, writing and recording in his own inimitable style works including ‘Homage to Home’, ‘Thirst of the Fish’, ‘Day of Storm’, 'In the Woods' and ‘Mirror Marriage’.
In 2004, Steve was asked to take over the running of the Ealing Guitar Society. It seems some things run in the family. (Click on article to read). 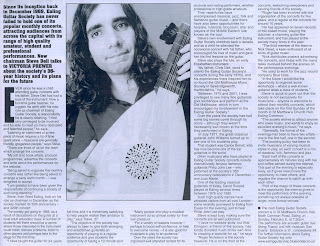 From 1999 to the present, Steve enjoys teaching the guitar, occasionally performing at parties and other private functions, and writing pieces on commission. 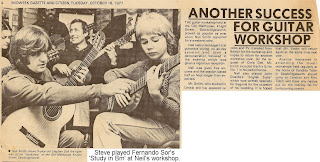 (from the Harlow Gazette, October 1977.  Click to read article) 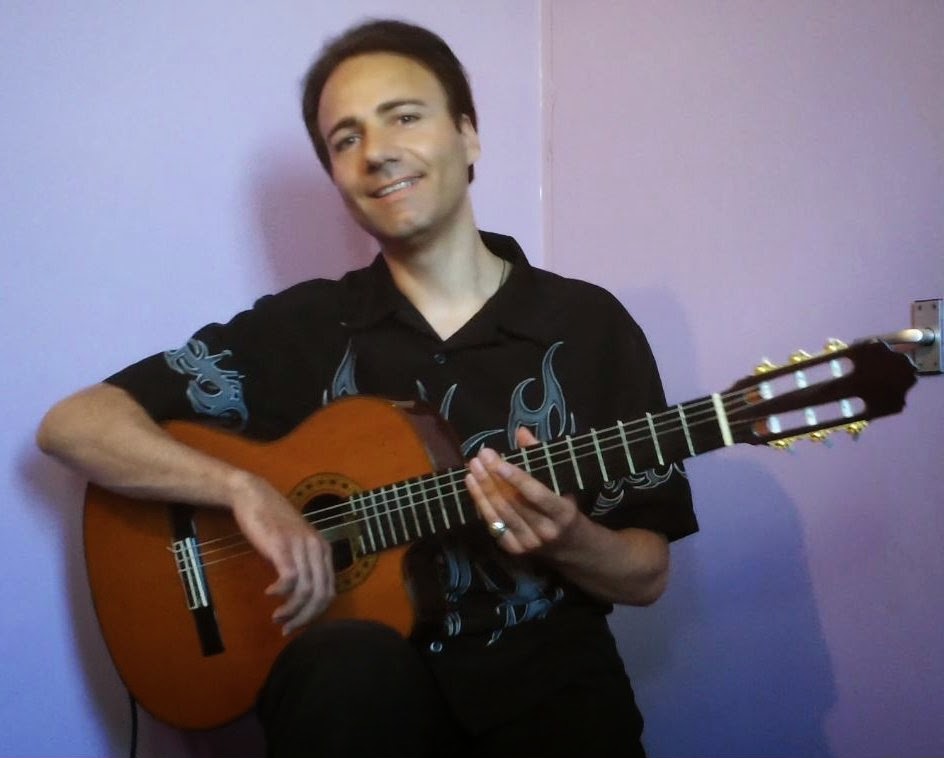